PrEP is availible in only two of the Nordic countries, Norway and Finland.  Sweden and Denmark has started discussions on how to implement PrEP, but have yet to conclude how to offer PrEP to those at risk of HIV. In Finland you pay for PrEP, because you pay for all your preventive medication yourself. Norway have full reimbursment for PrEP and all consultations are for free. There is estimates that 500 people are on PrEP in Norway.  The Olafia clinic have the main responisbility for prescribing and monitoring PrEP in Norway. Local hospitals can also prescribe and follow up PrEP patients. There is high demand on PrEP in the Oslo region, and a wating list for first consultations on PrEP at the Olafia clinic. A quicker alternative is a PrEP consultation at AHUS hospital, 30 min drive from Oslo.  You can read about what PrEP is, how it is used and how you accsess it on Olafia.no

Section 237 of the Penal Code was amended by the Norwegian Parliament earlier this month. The Act now clearly states that a person living with HIV and having taken adequate steps to prevent transmission, like using a condom or being on successful ART treatment, cannot be prosecuted.

Section 237 of the Penal Code was amended by the Norwegian Parliament in June 2017.

Section 237 of the Norwegian Penal Code criminalizes transmitting a hazardous communicable disease. The new provisions do not make reference to The Communicable Disease Control Act that lists a number of communicable diseases that is hazardous to public health. Hence, people living with HIV who are on antiretroviral treatment (ART) or who use a condom can no longer be prosecuted.

In the amended provisions, transmission of HIV or exposure to HIV may still be criminalized. However, if appropriate action has been taken to prevent infection, the person is cleared of criminal liability. ART treatment and condom use are two appropriate actions.

If a person has disclosed his or her HIV-positive status prior to an unsafe sexual relation, the person cannot be prosecuted, according to the Act. Disclosing a positive HIV status to a sexual partner equals consent.

Furthermore, the preparatory works lists further aspects that will exempt a person from prosecution. The Ministry of Justice underlines that any person who acts responsibly to avoid infecting another person shall not be prosecuted. Disclosing your HIV status to a (potential) sex partner also make you immune to prosecution. However, Norwegian law does not require people living with HIV to generally disclose their status to potential sexual partners.

To be proven guilty of an offence, the prosecuting authority has, according to the preparatory works, to prove an act of gross negligence. This means so called normal sexual intercourse is not punishable. Section 237 only comes into effect if you fail to take your ART-treatment and have much unprotected sex or have shown a threatening or violent behaviour.

In recent years, the provisions of the Penal Code on transmission have been used in connection with other sex offenses such as rape and sex with minors. In one known case, a person charged with exposing someone to the risk of transmission was acquitted due to being on successful ART treatment, and hence not being infectious.

In summary:
• Cannot be prosecuted if on successful ART treatment
• Cannot be prosecuted if using condoms
• Oral sex is not seen as hazardous behaviour
• Consent to sex with a person living with HIV frees the person from criminal liability
• Exempted for punishment are also infections from sex workers and injecting drug users, as well as transmission from mother to child. 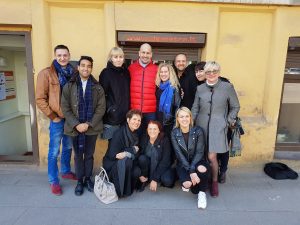 HIV-Nordic had a great collaboration meeting with the organization Demetra in Vilnius, Lithuania.

We got a informative introduction about the HIV-situation Lithuania and the great work Demetra are doing all over the country. WE had good discussions and sheared best Our knowledge and best practices. We look forward to more Collaboration in the future.

One of the biggest differences between the Nordic and Baltic, is that in all the Baltic countries they do not start HIV treatment before CD4-count is below 350. This is fare from the international guidelines that state that treatment shoulde start as soon as possible.

This weekend will also consist of Consitutive Meeting and regular Board Meeting.

The agendas for The Annual Meeting and The Constitutive Meeting and Board Meeting, documents for the Meetings are beeing sendt out to the Members and  Board Members: